Lots of good things happen when you eat well (and by well, I mean forgoing the advice of the dietary guidelines and following a less processed, more whole food kind of approach). Your sleep can improve, your skin clears up, your eyes sparkle with an increase in vitality and that brain fog you were struggling with for years (it’s just age!) has cleared. Your concentration levels are second to none.

But your weight isn’t budging. And you’re frustrated as hell. I get it. I talk to many clients and online coaching members about this. If all other aspects of your health improve with the change in diet and lifestyle, then by default, excess body fat should begin to shift. But, unsurprisingly, not for everyone*.

What,then, are two diet ‘hacks’ that could help you push through the weight loss stall?  Well it could be pretty simple, actually. You could either eat more, or eat less.

If you are consistently trying to eat fewer calories, this can backfire on you – over an extended period of time this will break down muscle tissue and reduce overall metabolic rate, sending signals to your hypothalamus to shut down all unnecessary metabolic processes as energy needs to be preserved. In this context, the last thing your body wants to do is shift body fat. This is something that the physique athletes (such as bodybuilders) have known for years and often use a ‘refeeding’ period (of more calories or carbohydrates in one or more meals per week) that sends a message to the hypothalamus assuring it that there is enough calories coming in that it doesn’t need to slow anything down, or shut any processes off. While this is used a lot anecdotally, in research we see an increase in the hormone leptin with an increase of carbohydrate calories during periodic overfeeding, though the metabolic changes are modest at best. Despite lack of scientific verification, I’ve seen many weight loss stalls broken through once calorie cycling is introduced (and overfeeding, something I term a metabolic reset meal – I should really ™ that one).

Some options could be to:

Your body responds well to changes in energy flux – consuming a higher number of calories on days where you expend more energy (ie a high energy flux) will encourage hormone signalling in your body that allows for more lean tissue to be laid down, and is great for bone health.

Conversely, if you’re eating too many calories on every day of the week, then you’re…eating too much. I know, can it really be that simple? Think about it: you’ve changed the types of foods you’re eating, and this has equated to better appetite regulation so you’re no longer eating because of insulin surges and blood sugar crashes. However you may still be in the habit of eating a certain amount of food which could be preventing you from dropping body fat. If you’re following a low carbohydrate, higher fat approach as a means to lose weight, a common mistake is that people eat too much fat. Don’t forget that you want to utilise some of those calories stored on your body, and part of the ‘HF’ of LCHF should come from this reserve rather than be provided by the diet. You don’t need to count calories to do this, either. It might be as simple as:

So, these are just a couple of things you could try. Of course, there may be more going on that is preventing you from shifting fat, and that’s where talking to a professional can help. But if you’ve not tried either of the above, then give it a whirl. For a good 4-6 weeks I think. Your body needs time to adjust to a change in environment.

* Now I don’t use scales in my clinic, nor make it a blanket recommendation for people to do so as their measure of fat loss. How your clothes fit, your waist measurement, what you see in the mirror –these are far more accurate ways of assessing changes in body composition. In saying that though, some are motivated by what the scales say and if they can remove their perception of self-worth from the number on the scales, then it’s not a problem. In addition, some find them a very useful monitoring tool and can keep on target if they use scales daily – research does support the daily use of scales for helping people reach their body composition goals.

Does bacon deserve the health halo it now seems to have in light of what is becoming common knowledge about saturated fat? Mm. Good question, and it probably comes down to context. If we were to position bacon against Flora Proactive, then that changes the question somewhat: which is better for your health? I mean, one is designed specifically to lower low density lipoprotein (LDL), aka ‘bad’ cholesterol (something we’ve been told for years to strive for) and is ridiculously expensive; the other is … well, bacon. Due to its saturated fat content (or perceived saturated fat, it contains less than 50% of its fat from saturated sources), it is always the second food which people think of when it comes to elevating cholesterol levels and causing heart disease – the first being butter.

Many clients come into my clinic with a total cholesterol above 5 mmol/L and are told by their GP that they should bring their cholesterol level down by way of eating low saturated fat, low total fat and reducing animal protein in their diet. OR (worse) go on cholesterol lowering medication (why is medication worse? Check out here and here). There are many things contributing to a higher cholesterol level, and the risk this poses to you is based on many factors. I’ve covered some of these (and what you can do about it) previously.

Here are 6 things I found useful to know about LDL cholesterol. I’m not talking about particle size, particle number, patterning of particles or Apo A or B, reverse transport cholesterol etc. Keeping it kind of simple. If you know more than your average Joe about cholesterol this will likely be a bit elementary. Otherwise:

If you have a clinical trial whereby 100 people are given a placebo drug* and 100 people are given the experimental drug, you might find that 2 people in the placebo group go on to have a heart attack (2%), 98 have no adverse events. In the drug-treated group, 1 person has a heart attack (1%), and 99 people have no adverse events. The difference is 1%, however the relative risk reduction is 50% and a much more impressive number, don’t you think? Those reporting in the media certainly do.

So, which is better for your health? IMO – while bacon may not be a health food, I’d choose it over the Flora (preferably free range, minimal added preservatives, along with an abundance of vegetables). Flora doesn’t have a lot going for it, TBH, and while it may lower your cholesterol level, how important is that really? If your cholesterol levels are high and you’re not sure of your risk, get in contact with someone like me who can work with you to address the lifestyle factors that might be driving up your cholesterol levels and contributing to health risk. 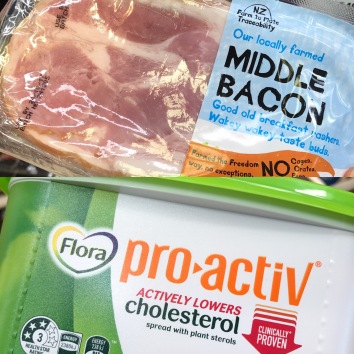 This bacon isn’t preservative free, however it’s the only one I could see that had less preservatives and was free-farmed, so using it as an illustration. Henderson’s is free of preservatives but only select supermarkets carry their free-farmed variety FYI

Recipes and adventures from a splendidly happy keto duo