(But I’m picking you know that).

By default, I’ve been in the sports nutrition world more than usual over the last couple of weeks. The Eat Well Live Well topic at New World (where I’m on hand to give nutrition advice and share good choices for foods), a sports nutrition talk during the week to a bunch of athletes and my first experience of Saturday morning kids winter sport this weekend. Well, first adult experience, as being your typical kiwi girl I was an enthusiastic netball player when I was in my early teens, and remember 9am starts at Kettle Park, playing on an ice-white netball court that had been frosted over the night before.

These experiences have reminded me that the ‘real food’ nutrition choices are not mainstream yet. And have a way to go before they will be. It’s still common for athletes to smash food straight after training (to make the most of the ’30 min window of opportunity’, to base their meals around processed carbohydrates (cereals, breads, pasta, rice) and to follow an eating style that didn’t allow for adequate delivery of fat and protein across the course of the day, so they are left irritable, tired, and hungry. The problem isn’t carbohydrates per se. It’s that processed carbohydrate has pervaded the diet to the extent that we now view it as an essential part of every meal at the expense of fat and protein which provide essential fatty acids and amino acids for healthy growth, development and recovery. This is especially true for children. It can get confusing though when cereal companies spend the big bucks persuading the consumer that products such as Nutrigrain or Special K are a nutritious, substantial start to the day. Such examples include:

The cereals I’ve mentioned above are as good (or bad) as junk food. But, do any of my points really matter if your kid is super active? They can’t just eat more of it, right? Hmm.  I’ve recently been reminded that there is a real culture in sports that suggest people who are active can ‘get away’ with eating high sugar junk food, and kids especially can eat sugar (I’ve heard some suggest they NEED sugar) as they can ‘burn it off.’ Nothing is further from the truth. Despite what the sports nutrition resources tell you, or what you might learn in a nutrition talk at the sports club, or see advertised on television, they don’t need additional sugar to make up for energy burnt during their practices or games. Sports drinks, white bread jam sandwiches, 2-3 jet planes aren’t necessary straight after exercise and are best left out of a young athletes menu. The ‘window’ of  opportunity of replenishing carbohydrate stores has been a convenient theory for sports nutrition products to justify their use, but we have since discovered the body can adequately restore carbohydrate up to 48 hours after a match or training. Unless, of course, there is a multi-day or multiple events on one day that requires a quick refuel, but even then there are options that allow for quick refuelling that are real food options.

A calorie is not a calorie, and active kids need more attention paid to their diet because of the heavier demands placed on their growing bodies. This expands their micronutrient and energy requirements. However, because we use body size as the main marker (or for some, the only marker) of health, we look at kids who are active and thin as ‘healthy’ without giving consideration to other equally (if not more) important indicators. I’ve worked with a number of adults who are prediabetic, yet have been fit and active their whole life, and a blood sugar screening reveals their metabolic state is probably worse than if they didn’t do any activity at all. A contributing factor to this is the carbohydrate-dominant diet that has fuelled them through the preceding years, and not just the additional treats they may have eaten because they could ‘eat what they liked.’ To the body, a high carbohydrate load is a high sugar load, regardless of where those carbs come from, because it’s broken down to the same single glucose unit.

So to save your active kids from the same fate, we need to set them up right from the get go.

Now I got a bad rap last year when I suggested that the new Weet-bix campaign that provided a ‘better brekkie’ was anything but. Weet-bix have long been the staple kiwi breakfast and growing up in winter, I had mine with hot water, warm milk, raw sugar, (because it was healthier*) and the aroma of a Gregg’s instant coffee with a freshly lit cigarette (it was the 80s, after all). Even now that combo conjures up that warm snuggly feeling of familiarity in me. The problem is that Weet-bix, or any cereal, isn’t typically a great vehicle for a nutrient dense, energy filling breakfast. Even with the campaign to make them a ‘better brekkie’. Most of the recipes on Sanitarium’s website sound amazing, but better breakfasts they are not.

So I offer a few suggestions**.

Any of these would be okay if your kid feels a bit nervous before an early weekend sports game and just wanted something small. Otherwise, they will probably need some more food to go alongside the ideas above. Some good examples would be: 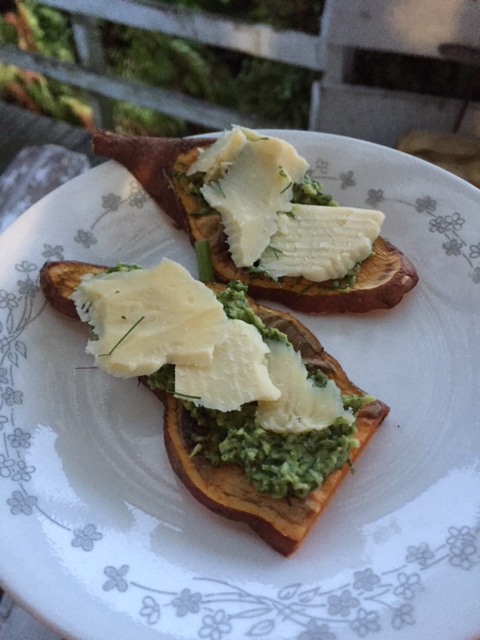 *it’s not healthier, but it the 80s we thought it was. Sugar is sugar is sugar. Including dried fruit, rice malt syrup, fruit juice and coconut sugar or coconut nectar.